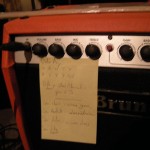 As planned, we took the Brunetti to the studio. We tried it and it revealed to be perfect for the sound we were looking for. I don’t need to precise how relieved we felt. Good point !

But we didn’t record this morning, we preferred to dedicate it to a rehearsal in order to finish all the remaining issues of the songs. Since there’s a lake just behind the studio, this was obviously the best place to go and get inspired. After a few hours, Louis, Mehdi & Diego came back with everything wrapped up. 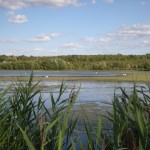 Around 12AM, we calibrated again all the amps to be sure we were safe for the rest of the recordings. Then, we jumped to the recording. Louis and Mehdi managed to record successfully Stomach and we added some parts to get a richer sound. I don’t tell you more, you’ll discover it with the album :D. Around 8PM, Stomach was done. 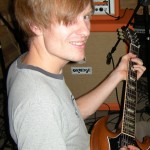 Then started a nightmare. We started to have many xruns during the recording. Xruns are basically desynchronization with the soundcard that makes the sound crack. After a few minutes, I realized that the disk was full. Ok. Shit. Let’s move some stuff to the backup device. What ??? The backup is just dead. Yeah, the hard disk decided to stop displaying its contents and we couldn’t write anything nor read on it. The bright side of the story is that I always make two backups. So, yes, we had another drive with to save us :D. We therefore lost one hour replicating the hard drive (we have more than 30Gb of data at the moment) to another, to be safe again. 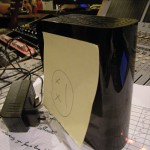 But ok, we could go on with the recordings.

We finished Blub around midnight and we added a bit of acoustic guitar, which, I have to say, make some parts of the song really better ! 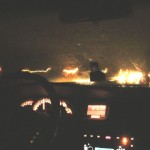 And then, as every night, we came back home… knowing that only two days remain to complete that. Waho !