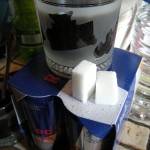 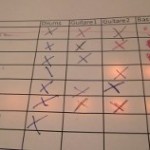 And… another new day. Wednesday was… kind of a dark day for us. After our daily 50 minutes of road and some chocolates, we calibrated the bass and configured Louis & Mehdi gears so that they can play along with Diego.
Even if we managed to find a good sound for the bass, we encountered a big problem : the old bass of Diego gave a weird sound and his new one added strange ones : result we had no bass to record. 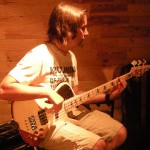 We therefore fired up our GSM & instant messaging software to borrow a bass. We contacted at least 6 guys and some shops and eventually found a good bass ! While Diego & Bertrand were out to get the bass, we started calibrating Louis’ amp. 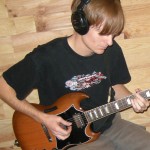 At least we tried. First, the room where Louis is recording is so small that we had a (too) strong natural reverberation. Second, the micro for the guitar we have is a mid quality product, so we have to make sure to use it as its best. We managed to get a decent sound thanks to JR (the bassist of my band) who helped us by listening to the takes through the Internet. Still, the sound was a bit low in the medium, which is not good at all. JR therefore told us to make a direct recording of the guitar so that we can tweak the result during the mix. Err, but the problem is that we don’t have a DI box to record the guitar without going through the amp : damned. 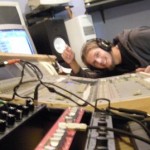 18:51. Back to the bass, we calibrated it, got a good sound and started recording. Diego successfully recorded Stomach, Ttta and finished on Nouvo. It was 0:35. Time to go back home, totally tired… 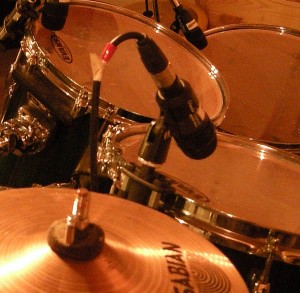 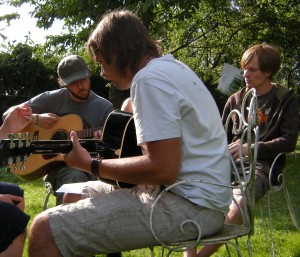 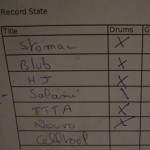 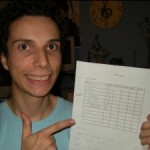 Just back from this first day of studio. Well, I have to say, things seem to go pretty well for now :-)

8:00AM: the bell rings, Louis is here with the van, we load all the gear and we’re ready to go. Mehdi was kind enough to bring the breakfast –even if it was dated. 50 minutes later, we’re there, joining Diego, Bertrand & Tania.

They were here, waiting for us, like dogs ready to bite. Diego, using his ol’ litt’l Colt, blew the barrier’s padlock with style so we could break into the studio… piece of cake. TRUE STORY. Hum, I’m digressing.

The morning was in fact dedicated to install the amps, guitars and other stuff in the studio. The first step was to hook all the cables according to the cabling scheme and see how it goes. During this preparation step, I took an express course on the available hardware (such as this Tascam TM-D8000) and we could hear the first sound a few minutes later. Great !

As the good practices outline, I’ve decided to record all the drum tracks in a row. The reason is simple : placing and calibrating the microphones on a drumset is just as hard as hell. This is why we spent about 2-3 hours trying to get a decent sound from the drums. Hopefully, it was smoother than expected (no big phase problems, etc) and we could jump to the recording step faster. We were basically ready to rock, awesome !

We started recording Stomach since it’s pretty straightforward for Bertrand and we could focus on fixing the remaining details on the console side. After a few takes, all was wrapped. Then, followed Blub which ended to be easier than expected : legen, wait for it, dary !

While Bertrand and I were focusing on recording the drums, Louis, Diego & Mehdi were trying to write the incomplete songs and finish the last minute modifications. They grabbed three acoustic guitars, went outside to play and managed to sort that out. Almost (:D). In fact, some of the songs still need more work since they have undergone heavy changes during the last days. You’ll know who to thanks for that (hint: this guy is bearded, hehe).

Then we tried to record HJ, but it was merely a disaster due to the lack of sound tablatures. We gave up after a few tries and decided to postpone it to the following day. Therefore, this was Salami‘s turn. The recording went smooth, even if Bertrand had some difficulties with the fast double-kick parts. Even if it was not perfect (still, quite good), we ended this day by recording Ttta. Not an easy one, and trust me, it was quite a tiring day for Bertrand, which started to feel the fatigue in his legs and arms. After a few unsuccessful takes, we decided to record it without the blasts (and record them later on). This way, we could have a safe base and complete it the next day. That revealed to be very successful !

So, to sum up, we now have a calibrated system to record all the drums and the already recorded songs are : Stomach, Blub, Salami* & Ttta* — (* = kicks missing).

Let’s see how it goes tomorrow but, as I said earlier, we’re on tracks I think. For now, it’s time to go to bed since we’re leaving at 7:30AM !

PS: I’ll update this post tomorrow with photos from Louis.